Amnesty believes Microsoft is in violation of a new United Nations Human Rights code, which says businesses should “seek to ensure that the goods and services they provide are not used to abuse human rights.” [1]

According to a Feb. 1, 2004 report on the British paper The Observer [1], “the human rights group has slated Bill Gates' company for an 'inadequate response' to escalating abuses in China. 'We don't believe this is appropriate or responsible,' said Mark Allison, an Amnesty International researcher who wrote the report. '[Microsoft] should be more concerned about human rights abuses and should be using its influence to lift restrictions on freedom of expression and get people out of prison. It is worrying that they don't seem to have raised these issues.”

On the other hand, “Microsoft told The Observer: 'we are focused on delivering the best technology to people throughout the world. However, how that technology is used is with the individual and ultimately not in the company's control.' Since China was admitted to the World Trade Organization two years ago a succession of big US technology firms have been supplying the government.”

Therefore, the World Organization to Investigate the Persecution of Falun Gong (WOIPFG) has conducted further investigation on Microsoft.

I. American Technology used by the CCP to Monitor and Filter Information on the Internet

In 2000, Haitian Software Company, a China-based software company that claims to have registered abroad says, “As a world-leading firewall and proxy server, Microsoft ISA is capable of doing more in today’s broadband Internet market…In order to fully utilize the tremendous potential of the ISA Server, Microsoft (China) Corporation Ltd. decided after careful planning to go for an industry security regulation software completely based on Microsoft ISA Server 2000, developed by one of the best providers “Haitian Software Company.” After testing done at the Microsoft China Research & Development Center (R&D), Microsoft (China) and Haitian Software Co. jointly released the Microsoft ISA Server 2000+ Haitian Internet regulation software. [2]” According to Microsoft (China) website, the HiTeam Mail Monitor and Management System (HTMMS) is based on Microsoft platform and is used monitor and manage web-based email clients, such as Outlook Web Access and many free WebMail. The HiTeam Mail Monitor (HTMM) Professional Edition, also called MailSieve, is used by Chinese public security, safety, military and secret agencies. Installed on one computer, MailSieve is capable of monitoring multiple 1Gbps data channels. The software is installed in the proxy servers to “monitor web-based emails and automatically block certain emails.” MailSieve has been installed in many telecommunications companies in large cities [3]. (webpage capture 1) 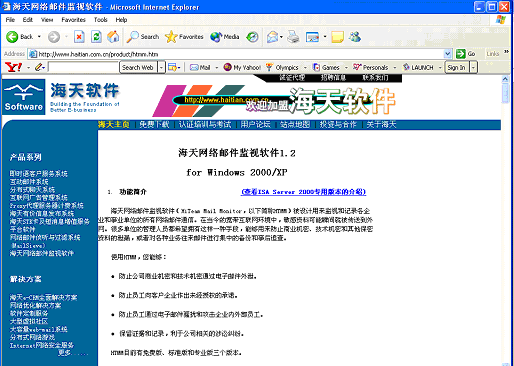 In introducing the new products on its website, Haitian Software Co. says that in a few years’ time, the number of Internet users in China will surpass that in America and China will become the country with the highest numbers of Internet users. However, “there is a lack of investigating, monitoring and intercepting of Falun Gong information.” In the meantime, “Voice of America is broadcasting information filled with American opinions to 180,000 Chinese listeners.” And “Chinese Internet users can access some banned websites via other proxy servers.” Therefore, Haitian Software Co. emphasizes
“…We must use powerful means including high-tech methods to build a line of defense in our country’s Internet space.” [4] (webpage capture 2) 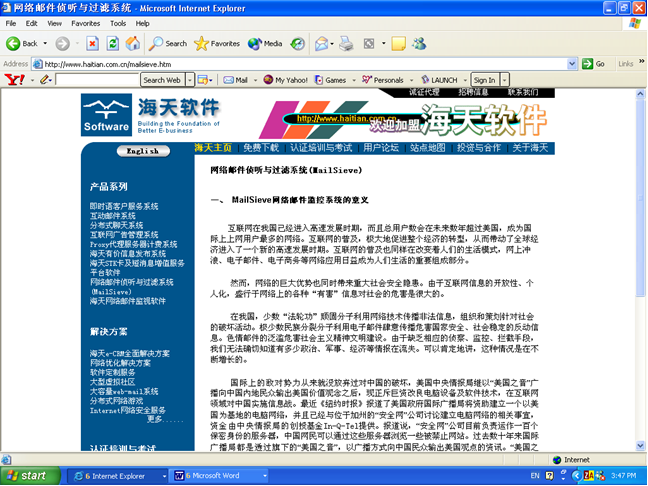 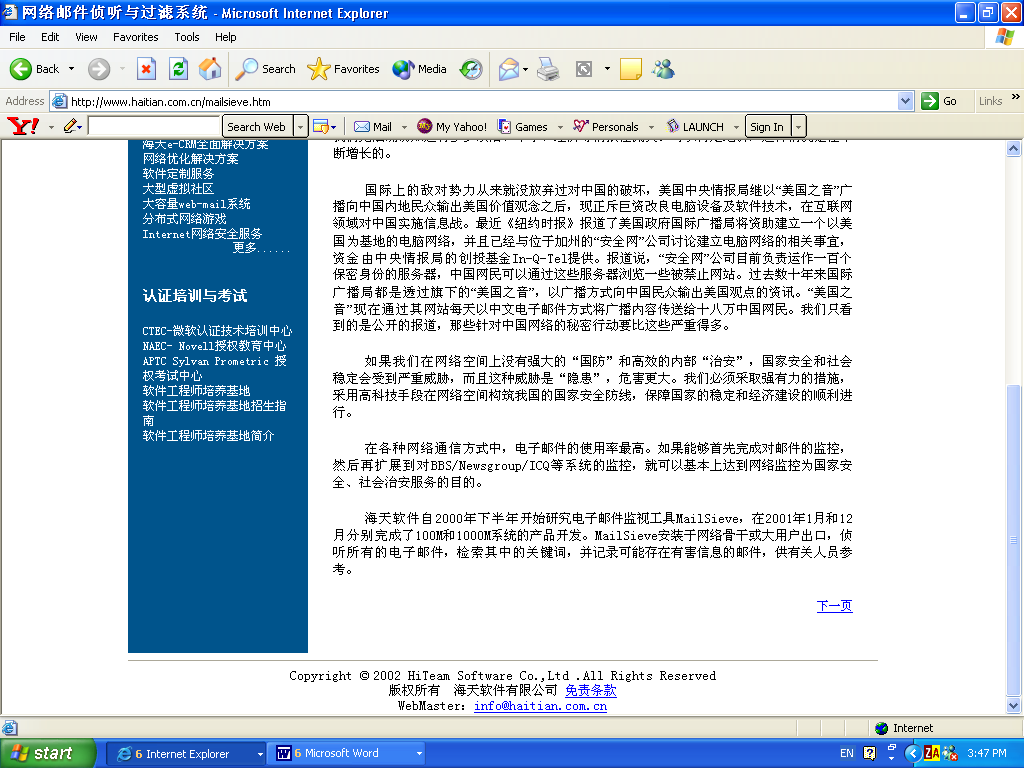 The Haitian Internet regulation software package is a combined effort between Microsoft and Haitain. Its copyright statement says: 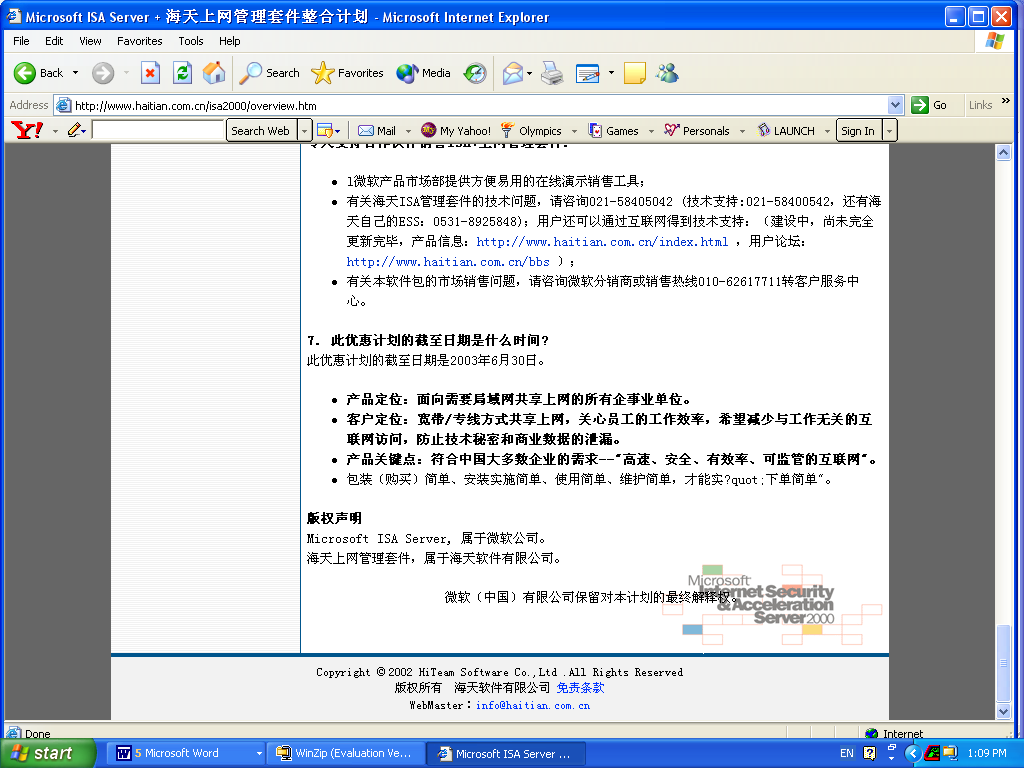 According to Heguang Group, Microsoft (China) Ltd. and Haitian Software developed a software product based on Microsoft ISA Server 2000. This software is for corporations to monitor the Internet access behavior of employees. It is capable of monitoring webpage traffic, FTP and email. It is the so-called “double effect” corporate Internet safety solution by Microsoft and Haitian. Heguang is the only distributor of the software in China. 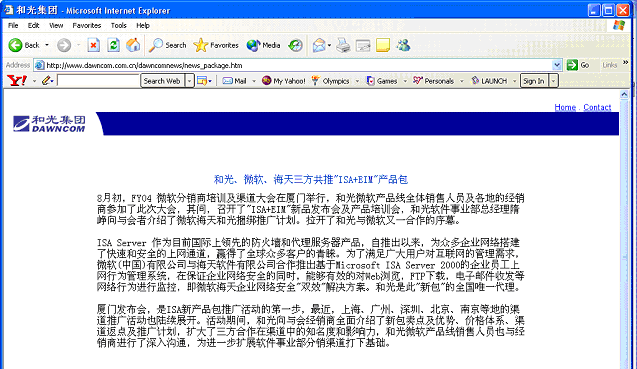 III. Microsoft ISA Server is becoming the monitoring and filtering software for the Chinese education system

Translation of the webpage capture:

Shaanxi Province Education Committee issued a Shaanxi Province Faculty and Staff Committee document (No.[2003]49). From this document, one can get an idea of how Falun Gong related information is being blocked on the Internet in the Chinese education system[8]. (Webpage Capture 6)

Excerpt from Document No. 49: “the CCP central committee and the provincial committee are very concerned with the battle on Internet. In order to continue and deepen the battle against ‘Falun Gong’ evil cult organization; aside from achieving the three “zero” target, the battle on Internet is the criterion by which the performance of the local work units and schools are judged…To better conduct the battle over Internet and especially blocking information from the internet is an important part of the battle against Falun Gong evil cult organization. The Party committees of schools must solidly intensify the leadership over the Internet struggle, organize forces and increase input…school leaders, especially the leaders in charge should periodically check on the situation and listen to reports, analyze the situation of the battle, make work arrangements; “610 Offices” of the schools should fully cooperate with the school Internet control units…actively organize and block information online; the school network center should strengthen their awareness of the battle on the internet,… effectively implement the work to block information from the internet.” The Document No. 49 [10] requires the monitoring of online information on campus network must be “around the clock, …strictly forbid people in the schools and especially ‘Falun Gong’ members to visit ‘Falun Gong’ websites through the campus network and school’s computer system, search, read, download or upload ‘Falun Gong’ material.” The same document also states the fundamental method to ensure the information blockade online is to “pay great attention to the technology of web blockade, increase financial and technological input, and upgrade and renew with the latest technology in a timely manner.” 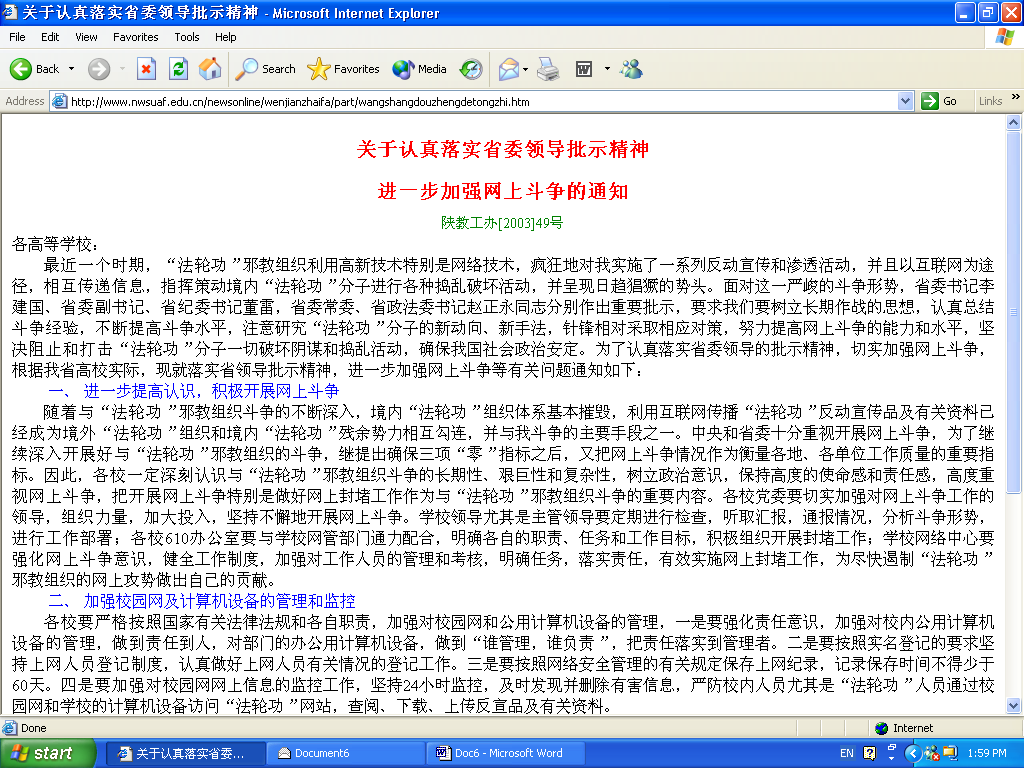 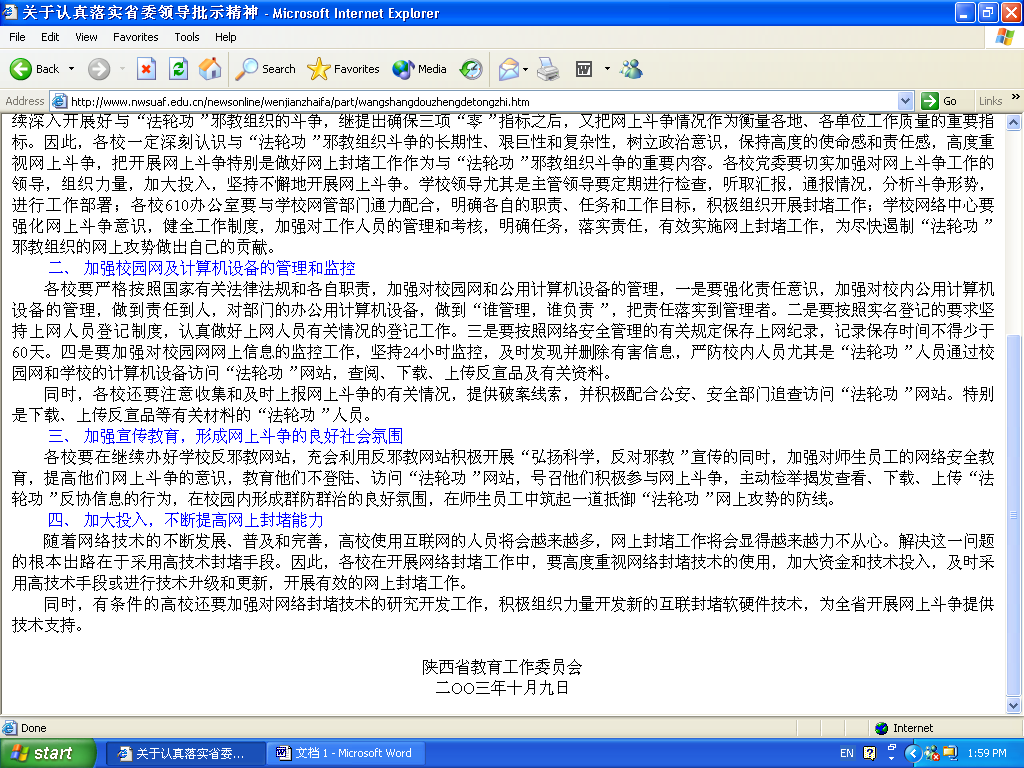 1. Microsoft (China) and the Third Research Institute of the Ministry of Public Security of China join hands in building the “united laboratory” that serves to abuse human rights

The Third Research Institute of the Ministry of Public Security of China provides technical support for the public security units in monitoring and controlling public web access. In the construction of “Golden Shield Project,” it was responsible for the “Golden Shield Project Security Platform Plan” that monitors the information on the World Wide Web [9,10].

On July 7, 2003, the “Third Research Institute of the Ministry of Public Security of China-Microsoft China Limited Information Security Technology United Laboratory” was formed [11]. Zhang Xinfeng, an assistant to Minister of Public Security, deputy head of National Golden Shield Project Leadership Group and the group office head; Li Runsen, the head for the Golden Shield Project Leadership Group and Head of the Commission of Science and Technology of the Ministry of Public Security; officials from Bureau 11 and Science and Technology Bureau of the Ministry of Public Security; and Huang Cunyi, President of Microsoft Greater China attended the opening ceremony. Yan Ming, the head of the Third Research Institute said, “The founding of the information Security United Laboratory marks the Third Research Institute has taken another step forward in the cooperation of information security.” 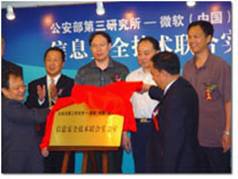 Caption: Third Research Institute of the Ministry of Public Security and Microsoft China Limited “Information Security Technology United Laboratory”
Tang Jun, the president of Microsoft China said information security requires, under the government’s guidance, the efforts from the whole IT field, research institutes and the users. Through this cooperation with the Third Research Institute, we hope to ensure the security of online information and together promote the development of information security in China [13].
In order to obtain more technical support from the West, on October 16, 2003, the Information Weekly of Guangming Daily, the China Information Technology Security Products Test and Certification Center and the Third Research Institute of the Ministry of Public Security together held a conference to “promote international cooperation to increase national information security.”
Gong Dingyu, the General Manager of the Strategic Development Dept. of Microsoft Greater China said, “Why do we have those two cooperation? The most important reason is that we want our customers to feel at ease…disclose the windows source codes and allow work units trusted by the government to have access to our source codes. We hope to erase people’s worries with such actions.”
Something else that was heard from the conference was: in order to receive orders from the (Chinese) government and government agencies involved in the secrecy bureau, large international companies must provide its technological sources to the Chinese government and sometimes even open its entire production line [12].

On July 6, 2001, “main participant of the Golden Shield Project” [13] ChinaSoft and Microsoft started their cooperation, which is supported by Microsoft executives, including CEO Steve Ballmer. It is also endorsed by the CCP State Planning Committee, Ministry of Information Industry, Ministry of Public Security and State Cryptography Administration [16].

The Goals of “Golden Shield Project”

3. “Golden Shield Project” - Playing a role in the persecution through Internet

On Dec. 19, 2001, on the Conference of the Public Security Bureau chiefs, Jia Chunwang stated, “under the guidance of the CCP Central Committee, the State Council, and all local Party committees and government branches, the state police system has firmly carried out the series of important instructions from CCP Central Committee, and is striking hard on those international or domestic hostile forces and Falun Gong organization, to prevent them from making troubles and destruction. … We should strengthen the police force with technology and implement ‘Golden Shield Project’ thoroughly to actively improve police power through science and technology.” [17]

On June 23, 2002, Southern City Daily reported, “The director of the State Information Security Test and Evaluation Center, Professor Qu Yanwen mentioned that, the “Golden Shield Project” of the Ministry of Public Security, was going to set up a state-wide public information network security monitor system… According to Qu Yanwen, the system will monitor information on the Internet and timely find the oversea information websites that need to be filtered, and timely deter disseminating information that is not proper to the domestic readers.” [18]

Anhui Province is among the provinces that implemented the most severe persecution against Falun Gong. Anhui Provincial Party Committee Secretary Wang Taihua, along with the “610 Office” system, is the main culprit of the countless ransack of homes, illegal fine, threatening, kidnapping, detention, illegal arrests, brainwashing, torture against Falun Gong practitioners. According to minghui.org, as of May 19, 2004, fourteen practitioners have been confirmed dead as the result of the persecution.

Under Jiang Zemin’s regime, Falun Gong practitioners’ emails are considered threatening to the CCP’s ideology supremacy. If one is caught downloading Falun Gong information from the Internet, one will face harsh punishment.

According to WOIPFG investigation report, from July 1999 to April 2004, there are roughly 108 Falun Gong practitioners detained and sentenced to forced labor due to accessing the Internet; three of them died [19].

On the fourth plenary session of the Science and Technology Committee that is under the Ministry of Public Security, the committee director Li Runsen claimed, “The ‘Golden Shield Project’ had played an important role in fighting against Falun Gong and other hostile forces.” [15]