Founded on Nov. 13, 2000, “China Anti-Cult Association” (referred to as the “cult association” in this report) is a government-backed organization consists of officials from the scientific and technological community. It hides behind the banner of non-governmental organization (NGO), yet plays a supporting role for the Chinese regime to persecute Falun Gong. Its official nature can be confirmed from many aspects, such as its organizational structures, financial sources, the nature and characteristics of its activities [1]. The purpose of this organization is to mobilize the human resources, material and finance resources in the scientific and technological community to assist the crackdown on Falun Gong.
Since its establishment, the “cult association” attempts to interpret and justify the persecution of Falun Gong to the world. It has been organizing exhibitions, holding forums, lectures and symposiums, establishing websites, compiling video and audio CDs, and publishing periodicals. It offers suggestions and methods of persecution. Its members produce theories against Falun Gong and directly participate in various persecution activities, including “brainwashing” Falun Gong practitioners.

Wang Yusheng’s Involvement in the Persecution 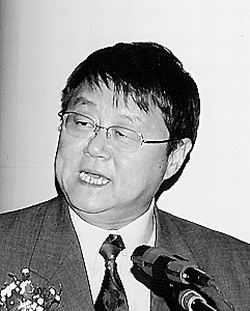 Wang Yusheng was born on Aug. 8, 1943 in Chongqing City Sichuan Province [2]. In 2000, he became the curator and research fellow at China Science and Technology Museum (CSTM). Additionally, he was member of the 11th Chinese People’s Political Consultative Conference (CPPCC) National Committee; vice president and secretary-general and legal representative of the “cult association;” member of United Nations Association of China and member of China Atheism Society.

4. Organized the "One Million Signatures" Campaign

On Jan. 16, 2001, Wang Yusheng, together with Pan Jiazheng and He Zuoxiu hosted the anti-Falun Gong “one million signatures” campaign in Chinese Academy of Sciences [9]. The “Tiananmen Square Self-Immolation” hoax happened one week later. Both events were organized by the regime to provide the necessary excuses and impetus for the persecution. The “one million signatures” campaign started in Beijing and quickly spread throughout China.

Wang Yusheng has been to the 1st Forced Labor Camp for Women in Shandong Province to participate in the persecution [19].

7. Incite Hatred in Society and Export the Persecution Overseas

In 2001, Wang Yusheng led the delegation to Geneva and gave a speech at the symposium on “rejecting cult, protecting Human Rights [21].” He submitted the 100-meter long scroll of “one million signatures” to the Office of High Commissioner for Human Rights of the United Nations in order to deceive the international community [22]. He was interviewed by Guangming Daily, which imported Wang’s activities in Geneva back to China as the anti-Falun Gong propaganda material [23]. Wang also went to the Chinese Embassy in France to spread anti-Falun Gong lies to the Chinese students in France [24].

In 2002, Wang Yusheng once again delivered the Chinese official slanders against Falun Gong at the symposium held at the Permanent Mission of China to the UN office at Geneva [25]. He held a press conference to instill the lies and hatred to the reporters from different countries [26]. Meanwhile, he also displayed the anti-Falun Gong letters solicited by the Chinese official organizations [27, 28].

In 2003, the “cult association” changed its appearance and attended the UN Conference on Human Rights in the name of “China Care and Compassion Society”(CCCS). Wang Yusheng hosted an anti-Falun Gong symposium in the Chinese community at Geneva to stir up the hatred against Falun Gong [29,30]. He submitted letters to the Office of High Commissioner for Human Rights of the United Nations to flaunt their spiritual persecution of Falun Gong practitioners through brainwashing [31], and spread the Chinese government’s anti-Falun Gong propaganda via press conferences [32]. He also displayed the anti-Falun Gong billboards and books, films and videos at the entrance of the United Nations.

Omitted as per the Chinese report