The WOIPFG's Open Letter Calling on Facebook to Lift Its Ban

On July 31, 2020, Facebook unilaterally blocked the WOIPFG’s homepage, which seriously undermined the WOIPFG’s legitimate rights. The reasons given in the report published by Graphika on Facebook are wrong and misleading. The WOIPFG is here to call on Facebook to lift the ban and restore its Facebook homepage, and to give an explanation and an apology for the incident.

The World Organization to Investigate the Persecution of Falun Gong (WOIPFG) was founded on January 20, 2003. It is based in New York with branches in Europe, Australia, Asia and Canada.

Our mission is to investigate the criminal conduct of all institutions, organizations and individuals involved in the persecution of Falun Gong; to bring such investigations, no matter how long it takes, no matter how far and deep we have to search, to full closure; to exercise fundamental principles of humanity; and to restore and uphold justice in society.

The principle of our investigation holds that those who have committed crimes shall be brought to justice. Individuals shall bear the same responsibility for their involvement in their organizations’ crimes, and those instigating the persecution shall bear the same responsibility of those that have physically carried out the persecution. We intend to uproot state-sanctioned crimes and safeguard human morality. The criminal conduct of all individuals within organizations, units and departments involved in the persecution will be thoroughly investigated and brought to justice.

WOIPFG was established to expose the horrific crimes against humanity to the world and to assist in courtroom trials which will bring the CCP to justice in the future. Since 1999, Jiang Zemin, the former head of the Chinese Community Party (CCP), has been using China’s entire state apparatus to carry out a genocidal persecution against Falun Gong practitioners. The CCP has also extended its persecution overseas. Through slander and fabricated rumors against Falun Gong, several billion people around the world have been deceived. Consequently, it is actually a persecution against all of humanity. The current judicial system in China is a component of the CCP’s tyrannical dictatorship, therefore expectations that China’s judicial system would openly investigate any crimes committed during the persecution, or to put a stop to the persecution are utterly impossible.

The CCP has also extended the persecution overseas, deceiving billions of people by slandering and spreading rumors of Falun Gong overseas. In fact, this is a persecution of all mankind. China's existing judicial system is part of the CCP's dictatorship and it is impossible to investigate and stop this persecution. In order to expose the crime of persecution worldwide and assist future court trials, WOIPFG was established.

Lawsuits against the Nazis were based primarily on evidence collected after Nazi Germany’s demise. It was considerably difficult to collect evidence while the genocide was underway, and any investigation during the genocide, no matter how thorough, was unable to stop the systematic killing during the Holocaust. Humankind still has not managed to completely rid itself of the calamities brought about by the global communist movement. A few decades after the fall of the communist parties in Eastern Europe, some traces of the former system still remain at the institutional level. In China, the Chinese Communist Party has caused the unnatural deaths of tens of millions of people, yet has never been held accountable; thereby creating a situation that has allowed the persecutors to be increasingly brutal and unscrupulous.

The Chinese communist regime launched the nationwide persecution of Falun Gong in 1999. The CCP is an incumbent totalitarian dictatorship and is the most evil and largest de facto terrorist entity in the world today. This is the first time in history that victims of state-sanctioned persecution have undertaken a systematic investigation and collection of evidence that launched legal, judicial and righteous actions against individual perpetrators to effectively deter further persecution. The WOIPFG is honored to have the privilege of initiating this systematic investigation.

The WOIPFG provides services to the entire society and all victims. The WOIPFG's investigative materials are published for access by the whole society through the Internet. All members of society are allowed and welcome to download and submit information, just identify or indicate the source. Of course, this includes Truth Media and all individuals or organizations that dare to expose the CCP's brutal and evil practices. Not only does this preserve the rights and interests of the WOIPFG, but it also helps expose the CCP’s criminal acts of persecuting the Chinese people and the people of the world and stop crimes. This is a just and benevolent act of exposing evil and saving lives!

Facebook has banned Truth Media, as mentioned in the report written by Graphika, in the accounts and homepages banned by Facebook

“Other content from the network focused more generally on China’s violations of human rights, especially its treatment of minorities. One of the pages in the network was called the “World Organization to Investigate the Persecution of Falun Gong”; many assets posted about reports of torture and other abuse in China. Such posts also included support for the pro-democracy protesters in Hong Kong.”

The WOIPFG and Truth Media were banned by Facebook—was it because they included this truthful content on their Facebook pages? During the entire ban process, Facebook did not have any personnel from any department investigate and verify facts with the WOIPFG. This is completely wrong. 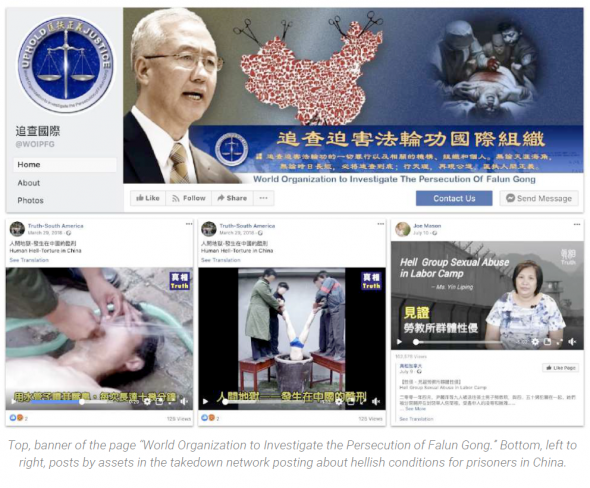 As a social network service company in a free society, Facebook’s move is tantamount to cooperating with the CCP to curb freedom of speech in a free society. It is like someone blocking exposure of the persecution of Jews in Nazi concentration camps during World War II. It is really helping the evil!

On June 17, 2019, the final verdict of the "Independent People's Court" in London ruled that the CCP government undoubtedly committed crimes against humanity and torture through large-scale live organ harvesting of groups mainly composed of Falun Gong practitioners. From a legal perspective, the CCP regime was convicted. The court found that the Chinese government under the CCP was a criminal regime.

The organization hereby declares that it welcomes the whole society, including Truth Media to apply all the information published on the international website. Everything we do is based on truly exposing all the criminal facts of the Communist Party of China in persecuting and enslaving the Chinese people and harvesting human organs.

2. Reopen the blocked WOIPFG homepage and the Truth Media homepage on Facebook.

3. Stop helping the CCP censor and curb freedom of speech, and no longer help the CCP to cover up the persecution of human rights, live organ harvesting and other crimes.

4. Provide an explanation and apology for this incident.

The largest scale of final judgement in human history is about to begin! That is: a great trial regarding the CCP’s crime of genocide of Falun Gong!

In order to welcome the upcoming historic trial of humanity, WOIPFG appeals to all righteous people all over the world to take immediate action to comprehensively collect the list of perpetrators and criminal evidence of the CCP’s persecution of Falun Gong, report to the WOIPFG and provide evidence for the upcoming trial! There is no time to delay! This is not only because these crimes must be punished, but also because it is to save the last moral conscience of mankind! We remind governments, organizations, and individuals from all walks of life to stand on the side of justice at this critical moment in history, to thoroughly hold the CCP accountable for crimes against humanity, and to bury the evil communism completely and forever on Earth.

The WOIPFG will continue to investigate, as always, the criminal conduct of all institutions, organizations, and individuals involved in the persecution of Falun Gong; to bring such investigations, no matter how long it takes, no matter how far and deep we have to search, to full closure; to exercise the fundamental principles of humanity; and to restore and uphold justice in society. This is our promise to God, and we will never give up.