An Investigation Report on the New Appointment of Wu Xiuhua as Director of the “North American Office for Cracking Down on Falun Gong” by the CCP’s Ministry of Public Security and the Ministry of State Security
June 29, 2021

World Organization to Investigate the Persecution of Falun Gong (WOIPFG) recently received a letter of appointment (attached) jointly issued by the Chinese Communist Party’s (CCP) Ministry of Public Security and Ministry of State Security regarding the appointment of Wu Xiuhua as the director of the “North American Office for Cracking Down on Falun Gong.” This appointment letter reveals the following information:

3. The North American Office has been elevated from the section level to deputy bureau level, which implies three things. First, the North American Office has already been in existence and was of the section level at its inception. Second, it has been elevated to the deputy bureau level in response to the CCP’s current policy to intensify its efforts to persecute Falun Gong. Third, it is inferred that there exist other similar “Offices for Cracking Down on Falun Gong” in all major regions of the world, and they may also have been elevated to a higher rank.

4. The newly appointed director of the North American Office is Wu Xiuhua, a male born on August 25, 1966. He entered Mexico in April 2021 and was quarantined for two to three weeks. Afterward, he entered the United States, and he is very likely to be still in the United States.

5. Currently, the above information cannot be found on the Internet. This organization is similar to the “610 Office”, which is a CCP’s illegal organization dedicated to the persecution of Falun Gong. Since the Joint Office is an organization illegally established in other countries to carry out criminal activities against a legitimate faith group in the host countries, it has to operate clandestinely to avoid the jurisdictional control of the U.S. government and other host country governments.

6. This new appointment indicates that the CCP is escalating its crackdown on overseas Falun Gong practitioners and changing its persecution tactics and methods.

7. This also shows that even during the coronavirus pandemic, the CCP has not relaxed its persecution of Falun Gong, and instead, its crackdown efforts have been continuously escalating. The communist dictatorship also continues to extend the persecution of its citizens overseas, and it continues to threaten, interfere with and undermine the sovereignty and national security of the United States and other countries.

8. As per the CCP’s long-standing pattern of overseas infiltration, the “Offices for Cracking Down on Falun Gong” may be affiliated with CCP embassies and consulates in different countries and rely on local Chinese communities and international student associations, which have long been subjected to the CCP’s control, to carry out clandestine activities.

After the CCP reassigned the duties and responsibilities of the former “Central Leading Group for the Prevention and Handling of the Cult Issue” and its office (i.e. the Central 610 Office) to the Central Political and Legal Affairs Commission and the Ministry of Public Security in March 2018, it continued its crime of persecuting Falun Gong practitioners. However, the new organizational structure and operational mechanism of the persecution are unknown. The inter-ministerial “Joint Office for Cracking Down on Falun Gong” and its system, as disclosed in the appointment letter, are likely part of the current organizational structure and operational mechanism for the persecution of Falun Gong. In particular, this is the first time that overseas administrative and executive bodies of the persecuting entities are revealed, and this also reveals that the CCP has recently begun escalating its overseas persecution of Falun Gong.

The CCP’s blatant trampling of human rights, undermining of international norms and reckless export of red violence is a serious violation of human dignity and human rights worldwide, as well as a grave insult to the sovereignty of the United States and other countries. And it is also a serious challenge to and mockery of modern civilization.

We call on the U.S. government and other governments to investigate and remove all unlawful personnel working for the CCP’s “Offices for Cracking Down on Falun Gong” and their influences.  This is to ensure the safety of their residents and maintain security and peace in their own countries and the world.

We request the U.S. government to investigate and punish Wu Xiuhua, the director of the CCP’s “North American Office for Cracking Down on Falun Gong”, who has sneaked into the United States.

We call on all governments, organizations, and righteous people around the world to take immediate actions to investigate and punish the evil organization called “Joint Office for Cracking Down on Falun Gong.” Let’s work together to eradicate the evil Chinese Communist Party!

We warn all those involved in the persecution of Falun Gong: The CCP is disintegrating, and it will be held responsible for all of its crimes very soon. The persecution of Falun Gong is a crime of genocide and a crime against humanity. The persecutors will face trials and the most severe punishments in the history of mankind! Any excuse of following orders from one’s superiors cannot be used as a reason for exemption, and all participants must bear personal responsibility. Confession, exposing other people’s crimes, and striving to make contributions for redemption is the only way out!

As always, WOIPFG will continue to investigate the criminal conduct of all institutions, organizations, and individuals involved in the persecution of Falun Gong; to bring such investigations, no matter how long it takes, no matter how far and deep we have to search, to full closure; to exercise fundamental principles of humanity, and to restore and uphold justice in society. This is WOIPFG’s promise to the Almighty. We shall never give up. 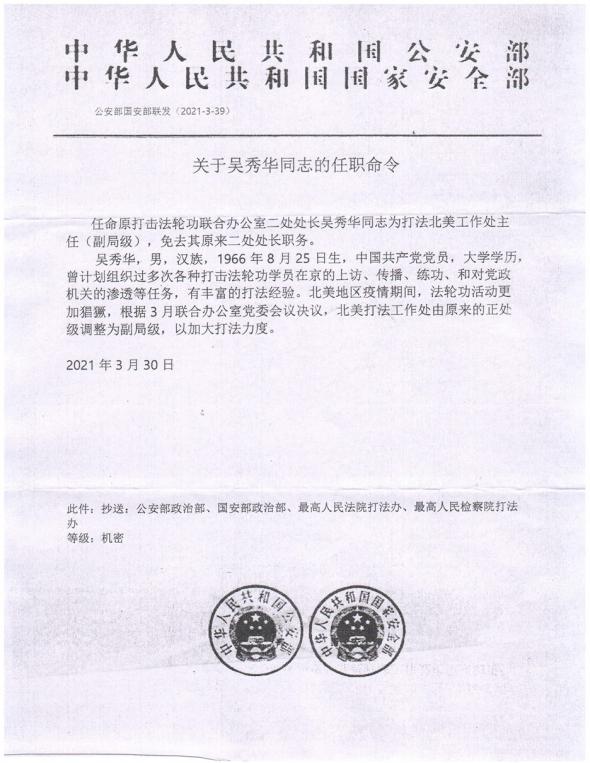