On July 2, 2003, the Xinhua News Agency reported from Zhejiang Province an article entitled "Suspect for Poisoning 16 Beggars Is a Falun Gong Member". The subtitle was "Huge Poison-Murder Case in Zhejiang Province Solved". The reporter was Lu Jin. This article was released at 17:37:16 Beijing time. A screenshot of the web page is attached below. The article mentioned a suspect by the name of Chen Fuzhao and claimed that he was a "Falun Gong member." 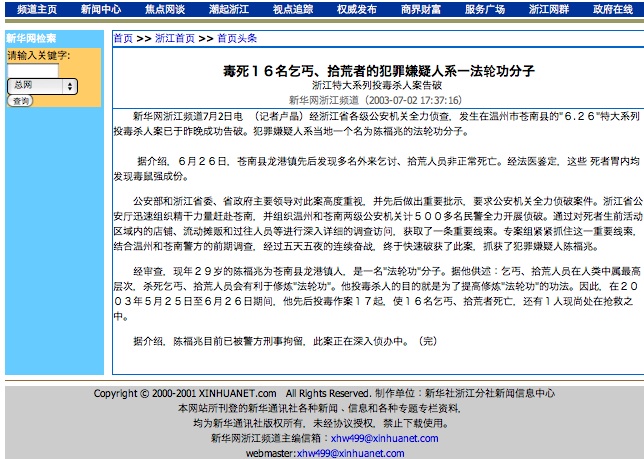 The World Organization to Investigate the Persecution of Falun Gong (WOIPFG) investigated this case. The initial findings are as follows.

The aforementioned July 2 article of the Xinhua News Agency said that the June 26 poison-murder case in Cangnan County, Wenzhou City, was solved "last night." This conclusion is not consistent with published reports out of Wenzhou City.

On the same day of the Xinhua News Agency's report, there was a local report published at 10:31:10 a.m. on the "Metropolitan Express" (Du Shi Kuai Bao) newspaper, written by reporter Tang Zewen, who was responsible for local criminal cases. The title of the article was "14 Beggars Die Under Unusual Circumstances in a Month in Longgang". This report presented more details than the Xinhua News Agency article: "A man on a motorcycle gave a beggar, an old lady, a bottle of spring water. The old lady fell to the ground and died shortly after drinking the water." "There were earlier major cases of murdering beggars in Lucheng District, Wenzhou City. The police arrested Chen Yongfeng on May 24 and concluded that he killed ten beggars, taking apart nine of the corpses. Between the date of Chen's arrest and June 26, when seven beggars died, another seven beggars died under unusual circumstances during the same month. So far the police are not clear whether the deaths of these 14 people have anything to do with the case of Chen Yongfeng." The report also mentioned that the Minister of Public Security Zhou Yongkang and the Secretary of Zhejiang Province issued orders, demanding the police to solve the cases quickly. 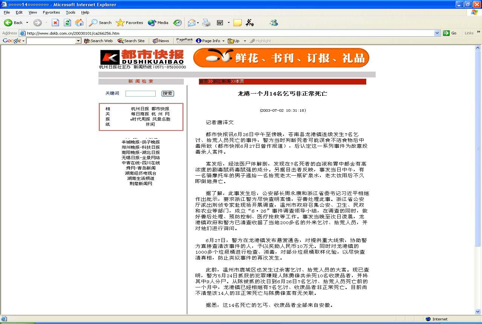 Fig. 2: A screenshot of the local report on the "Metropolitan Express" (Du Shi Kuai Bao) newspaper

When Tang Zewen published the report at 10:31:10 on July 2, the case was not solved yet. However, in the Xinhua News Agency article on July 2, the case was solved "last night," or July 1. In China, such local criminal cases are usually followed and reported by local media. The Xinhua News Agency reported conclusions before the local media and gave a different version of the report. The local report referred to seven people killed, including six men and one woman, who were all from other areas. Their ages ranged between 50 and 70. This was a typical media report on criminal cases, with details of the victims' gender, age, and so on. The report by the Xinhua News Agency lacked detail, giving no background or specifics of the case. The article appeared to be more focused on linking the case to Falun Gong than anything else.

Result of the Initial Investigation of WOIPFG: the Case Has Not Been Solved Department of Propaganda in Cangnan County, Wenzhou City, Location of the Murder Case: A member of the Department told us that the case had not been solved. He has not heard that the suspect was a Falun Gong practitioner. "The local newspaper didn't report this. More than 500 policemen, many of them are my friends, are still assigned to investigating this case."

The Radio and TV Broadcasting Bureau in Cangnan County, Wenzhou City: A man working in the Bureau told us that there were no such local reports, nor any reports about the suspect being a Falun Gong practitioner.

There have been several similar murder cases in Longgang Town, Cangnan County, Wenzhou City: the May 24 case and another 7 deaths between May 24 and June 26. However, these cases didn't get the attention of the provincial government and didn't receive much media coverage.

After the "Metropolitan Express" reported the attention of the provincial government and the high-ranking officials to the June 26 case, suddenly the case was resolved according to the Xinhua News Agency and the suspect was a Falun Gong practitioner.

Based on our initial findings, this appears to be another case of the Xinhua News Agency and high-ranking officials in the Ministry of Public Security framing Falun Gong with murder.